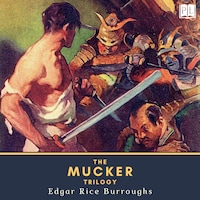 The Mucker is a novel by American writer Edgar Rice Burroughs, begun in August 1913 and published by All-Story Weekly in October and November 1914. The book version was first published by A.C. McClurg on 31 October 1921.

The Oakdale Affair is a short contemporary mystery novel by American writer Edgar Rice Burroughs. It was written in 1917 under the working title of Bridge and the Oskaloosa Kid, and is a partial sequel to The Mucker (1914/1916). It was adapted into a silent film in 1919 starring Evelyn Greeley. Bridge, the protagonist, was a secondary character in the earlier work. It was first published in Blue Book Magazine in March 1918. Its first book publication paired it with an unrelated tale, The Rider, in The Oakdale Affair and The Rider, issued by Edgar Rice Burroughs, Inc. in February 1937 and subsequently reprinted by Grosset & Dunlap in 1937, 1938 and 1940.