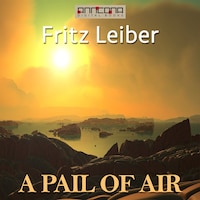 A Pail of Air

A Pail of Air is a science fiction short story by Fritz Leiber which appeared in the December 1951 issue of Galaxy Magazine and was dramatized on the radio show X Minus One in March 1956.

The story is narrated by a ten-year-old boy living on Earth after it has become a rogue planet, having been torn away from the Sun by a passing ”dark star”.
The loss of solar heating has caused the Earth's atmosphere to freeze into thick layers of ”snow”.
The boy's father had worked with a group of other scientists to construct a large shelter, but the earthquakes accompanying the disaster had destroyed it and killed the others...

The story is collected in The Best of Fritz Leiber, Constellations, and Fritz Leiber: Selected Stories (2010).

Fritz Reuter Leiber, Jr. (1910-1992) was an American writer of fantasy, horror, and science fiction. He was also a poet, actor in theatre and films, playwright and chess expert. With writers such as Robert E. Howard and Michael Moorcock, Leiber can be regarded as one of the fathers of sword and sorcery fantasy, having in fact created the term. Moreover, he excelled in all fields of speculative fiction, writing award-winning work in fantasy, horror, and science fiction.