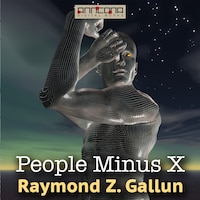 People Minus X is a science fiction novel by Raymond Z. Gallun first published in 1957.

A disastrous experiment destroys the moon and kills millions on earth. The invention of artificial flesh lets them return to life as androids, a second and perhaps superior human species. Mounting tensions between the naturals and the “phonies” erupts in violence. Will this scientific advance bring eternal life and the gift of travel to the stars or bring about mankind’s self-destruction?

”AMONG THE BETTER SCIENCE-FICTION NOVELS.”—Wilmington News

”Scientific experiments on the moon and an accidental lunar explosion that seared the earth triggers another tale from the imaginative pen of Raymond Z. Gallun, a familiar name to science-fiction readers.

”The secret of life and the restoring to the living of victims of the holocaust initiate a conflict for Ed Dukas, Gallun's scientific pioneer of the future. Restoring persons through scientific methods, personality records and the memories of near kin, leaves one fatal flaw. They lack one indefinable quality—a divine spark, perhaps a soul.

”Gallun depicts a struggle between the restored people and the natural living. Life on the asteroids, thought machines, a journey to Mars and a star ship expedition to Sirius are woven into the plot.

”PEOPLE MINUS X is packed with action, science-fiction style.”—Detroit Times