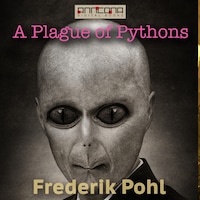 A Plague of Pythons

A Plague of Pythons is a science fiction novel by Frederik Pohl. It was originally published in 1962 in Galaxy magazine and in book form in 1965, it was republished in 1984 under the title Demon in the Skull.

The title derives from the words ”Domina Pythonis” used as part of an exorcism ritual performed in the first chapter to scare away the ”demons” that seem to possess people in the novel.

In a post-apocalyptic world where every government in the world has been overrun by its own military machinery, only to see that military machinery self-destruct, people are randomly being affected by a plague that seemingly takes over their brains and forces them to commit heinous crimes.

Chandler is one of these unfortunate victims, the perpetrator of rape and murder. He is driven out of his community as a Hoaxer (someone who feigns being a victim of the plague), branded on his forehead with the letter H. But he is not feigning.

In his travels, he finds the source of the plague, and it's not what people think. It's up to him to deal with it, and he does. But to what end?

A Plague of Pythons was first published in Galaxy Magazine in October and December 1962.