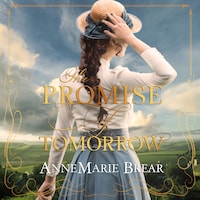 The Promise of Tomorrow

Charlotte Brookes flees her lecherous guardian, McBride, taking her younger sister with her. After a year on the road, they stumble into a Yorkshire village where the Wheelers, owners of the village shop, take them in. This new life is strange for Charlotte, but preferable to living with McBride or surviving on the roads.

Harry Belmont is an important man in the village, but he’s missing something in his life. His budding friendship with Charlotte gives him hope she will feel more for him one day, and hewill marry the woman he yearns for.

When McBride discovers where Charlotte lives, his threats begin. Harry fights to keep Charlotte safe, but World War I erupts and Harry enlists.

Left to face a world of new responsibilities, and Harry’s difficult sister, Charlotte must run the gauntlet of family disputes, McBride's constant harassment, and the possibility of the man she loves being killed.

Can Charlotte find the happiness that always seems under threat, and will Harry return home to her?