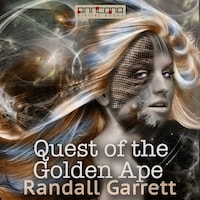 Quest of the Golden Ape

Quest of the Golden Ape is a science fiction novel by Randal Garrett and Stephen Marlowe first published in 1957.

How could this man awaken with no past—no childhood—no recollection except of a vague world of terror from which his mother cried out for vengeance and the slaughter of his own people stood as a monument of infamy?

A classic pulp adventure of parallel worlds. The other world is on the far side of the sun with the same rotation period so we can't see it. It is a different world; sort of like the world was like when the mongols ruled much of Asia and Europe. Warring tribes, and lots of injustice there from a nasty ruler…

Stephen Marlowe (1928-2008) was an American author of science fiction, mystery novels, and fictional autobiographies of Christopher Columbus, Miguel de Cervantes, and Edgar Allan Poe. He is best known for his detective character Chester Drum, whom he created in the 1955 novel The Second Longest Night.