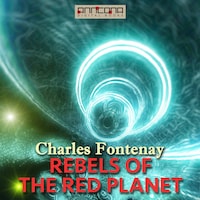 Rebels of the Red Planet

Rebels of the Red Planet is a science fiction novel by Charles Fontenay first published in 1961.

Human genetic engineering experiments to facilitate colonization of Mars take some tragically wrong turns. Include the obligatory 1950's space romance and you have - pulp - but good pulp. Very entertaining.

Dark Kensington had been dead for twenty-five years. It was a fact; everyone knew it. Then suddenly he reappeared, youthful, brilliant, ready to take over the Phoenix, the rebel group that worked to overthrow the tyranny that gripped the settlers on Mars.

The Phoenix had been destroyed not once, not twice, but three times! But this time the resurrected Dark had new plans, plans which involved dangerous experiments in mutation and psionics.

And now the rebels realized they were in double jeopardy. Not only from the government's desperate hatred of their movement, but also from the growing possibility that the new breed of mutated monsters would get out of hand and bring terrors never before known to man.