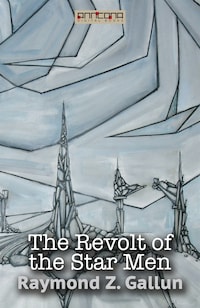 The Revolt of the Star Men

The Revolt of the Star Men is a novella by Raymond Z. Gallun first published in 1932.

”A bulk dropped down on the nose of the craft. A pair of hands gripped the barrels of the machine gun and tore them from the mountings.”

The creatures that people this exciting story of Mr. Gallun, may seem at first blush to be impossible monstrosities. Yet, on consideration, we must realize that they are not so far-fetched.

Even in our picayune little corner of the universe, we find in the insect kingdom a form of life that has survived through every possible earth catastrophe in the last 40,000,000 years. With their skeletons on the outside of their bodies instead of on the inside, insects are able to protect their bodies from heat, cold, and from accidents that would kill us. If the insect's shell were harder and thicker and made of heat-resisting material, it might conceivably be able to live in space without other protection.

The point is that Mr. Gallun makes his Space Men so convincing that we can do nothing but believe in them. And he has woven about them such a thrilling story of adventure on two worlds that one will have to read and reread it, to get from it the fullest enjoyment.

The Revolt of the Star Men was first published in Wonder Stories Quarterly Winter 1932.