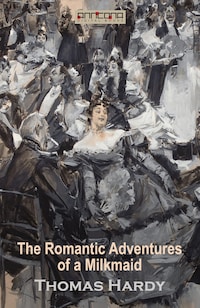 The Romantic Adventures of a Milkmaid

The Romantic Adventures of a Milkmaid is a novella by English author Thomas Hardy, first published in 1913.

A milkmaid, Margery, encounters a mysterious foreigner and perhaps prevents him from committing suicide. In gratitude, the man offers her any reward she can name.

She tells him she wants to go to a ball. He takes her, admittedly a bit reluctantly, to a yeoman's ball in a neighboring county. From there the story continues because of course, a lot happens after the ball.

She happens to already have an engagement to a local lad but his hold over her seems to grow of its own accord. This Hardy story may not end the way you wish, but that is often true of stories by this master writer.