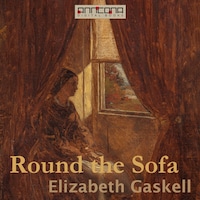 Round the Sofa (1859), is a book of stories by the lady that Charles Dickens called his “dear Scheherazade” due to her skill as a story teller. That Lady was Mrs. Elizabeth Gaskell (North and South, Wives and Daughters, Cranford etc.).

- Mrs. Gaskell begins with Round the Sofa, a short story which she uses as a device to stitch together six previously published stories into a single work. It introduces us to a set of characters who take turns to recount stories to one another during their weekly soirée.

- My Lady Ludlow tells the story of the widowed, aristocratic Lady Ludlow and her fierce resistance to change. It is told through the eyes of one of her young charges. Incidentally, it was one of the books used to create the TV series Cranford.

- An Accursed Race is actually an essay about a persecuted minority group, the Cagots in Western France.

- The Doom of the Griffiths. A Gothic short story about a cursed family and set in Wales.

- Half a Life-Time Ago. A novella set in the Wiltshire Dales.

- The Half Brothers. A sad short story about brotherly love and a sheep-dog dog named Lassie!

Elizabeth Cleghorn Gaskell, (1810-1865), was an English novelist and short story writer during the Victorian era. Her novels offer a detailed portrait of the lives of many strata of society, including the very poor, and are of interest to social historians as well as lovers of literature. Mrs. Gaskell, as she was often referred to, is considered one of the greatest British novelists of the Victorian era.