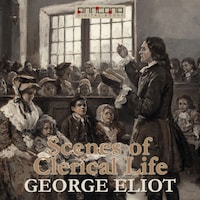 Scenes of Clerical Life is a novel by George Eliot first published in 1858.

Scenes of Clerical Life, was the first published fiction by George Eliot. It consists of three novellas based on the lives of country clergymen and their communities.

The three stories are set during the last twenty years of the eighteenth century and the first half of the nineteenth century over a fifty year period.

The stories take place in and around the fictional town of Milby in the English Midlands. Each of the Scenes concerns a different Anglican clergyman, but is not necessarily centred upon him.

Eliot examines, among other things, the effects of religious reform and the tension between the Established and the Dissenting Churches on the clergymen and their congregations, and draws attention to various social issues, such as poverty, alcoholism, and domestic violence.

These characters interest Eliot not for their theology — she had abandoned conventional Christian belief — but for their humanity.

In these stories, we find the earliest signs of the narrative voice, the humanism, and the realism that would make George Eliot one of the greatest novelists of the 1800s.