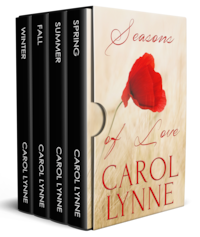 Seasons of Love follows forty years in the lives of two men, Sidney Wilks and Grady Nash, from the Spring of their relationship when love is new and shiny through to the Winter of their partnership when thirty years of being a couple has begun to lose its sheen.

On the day of his mother's funeral, ten-year old Sidney Wilks is silently comforted by the presence of one man, ranch hand Grady Nash. Little did Sidney know that Nash would become the only stable figure in his life for the next forty years.

Years later, after an evening of typical college fun, Sidney is involved in a serious car wreck. It's Nash who once again steps in to rescue Sidney and nurse him back to health.

While trying to get close enough to Sidney to help him heal, Nash's feelings begin to change towards the twenty-one year old. For him, loving Sidney was nothing new, but when his body begins to desire the small man, Nash is forced to re-evaluate his protective instincts.

What kind of future could the two men possibly have? Nash's life is centred on horses and cattle, while Sidney has dreams of escaping the small-town Kansas life to build skyscrapers. Can two men who want opposite lifestyles come to a compromise, or will Nash be forced to allow Sidney to spread his wings without him?

As Spring gives way to the heat of Summer, Sidney Wilks and Grady Nash settle into their new lives in a Chicago suburb.

In an attempt to fit in to his new surroundings, Nash becomes friends with his co-workers at the garage. The only hitch is he has to go back into the closet he’d finally escaped. With Sidney working long hours, Nash doesn’t feel the need to expose his relationship to guys who wouldn’t understand. The dual-life leads to misunderstandings and hurt feelings, forcing Nash to make life-changing decisions.

With Nash battling to find a purpose away from the ranch he loves, Sidney’s busy enduring long hours in an office he hates. With his prize-winning building completed, Sidney’s creativity is put to use designing buildings that don’t inspire him. When an opportunity to design the building of his dreams presents itself, Sidney’s loyalties are put to the ultimate test. Will he reach for his dream and uproot Nash from a life he’s finally settling into, or will he sacrifice his personal goals for the good of the man he loves?

For over ten years, Sidney Wilks and Grady Nash have devoted their lives to each other. With their relationship solid and thriving, they each turn their attention to their careers.

Nash loves his job as a day trader but hates what it's doing to his body. The hours of sitting in front of a computer combined with his love of beer begin to take a toll on his aging body. Worried that he'll lose Sidney to the hot muscled construction worker his partner works closely with, Nash decides to get his body back into shape, no matter the cost to his overall health.

After the death of his father, Sidney is so busy dealing with the years of hurt and betrayal at the hands of Jackson Wilks that he doesn't notice the warning signs of Nash's dangerous new lifestyle. When Nash's sex drive falters, Sidney turns the rebuffs inward instead of looking at the bigger picture.

It will take the counsel of a close friend to open Sidney's eyes to what is really going on, but will it be too late?

Just as the seasons change, so do people.

After eighteen years together, Sidney Wilks and Grady Nash thought their bond was unbreakable, but they are about to discover it takes a lot of work to make a relationship last.

The death of his surrogate father followed by an irreparable fight with his long-time friend threatens to pull Sidney down into an abyss of depression. When Nash suggests getting away for a much-needed vacation, Sidney eventually agrees, believing it will give him time to heal. Unfortunately, the sun-filled cruise only serves to drive a wedge between him and the man he loves.

Back to their daily lives, Sidney buries himself in work, eventually accepting a partnership at Creative Solutions. As rewarding as his new position is, it further drives Sidney and Nash apart. Although his love for Nash never wavers, Sidney begins to wonder if Nash is tiring of him.

Faced with a life-altering decision, it will take the friend he thought he'd lost to make Sidney realise his future was written years earlier when a man named Nash befriended him.