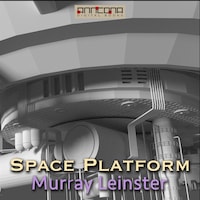 Space Platform is a science fiction novel by Murray Leinster first published in 1953.

In the little desert town of Bootstrap stands a huge metal shed. In the shed men are building an object that can change the history of mankind. It is a Space Platform. Propelled to an orbit 4000 miles from Earth this platform will serve as the starting place for man’s exploration of mysterious outer space.

An exciting story of a young man helping to build this first station. With scientific accuracy and imagination Murray Leinster, one of the world's top science-fiction writers, describes the building and launching of the platform. It is the first novel in the author's Joe Kenmore series.

Here is a fast-paced story of sabotage and murder directed against a project more secret and valuable than the atom bomb!

Reaching for the Stars....

Ever since ancient man first gazed in wonder at the stars, humanity has dreamed of traveling to outer space. Now scientists agree that space-flight may very soon become a reality.

Space Platform tells of man’s first step into outer space ... of the difficulties and dangers of reaching for the stars in an exciting adventure.

When young Joe Kenmore came to Bootstrap to install pilot gyros in the Platform he hadn’t bargained for sabotage or murder or love. But Joe learned that ruthless agents were determined to wreck the project.

He found that the beautiful girl he loved, and men like The Chief, a rugged Indian steelworker, and Mike, a midget who made up for his size by brains, would have to fight with their bare hands to make man’s age old dream of space travel come true!