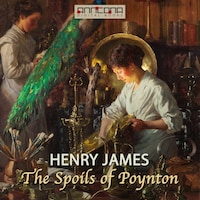 The Spoils of Poynton

The Spoils of Poynton is a novel by Henry James, first published under the title The Old Things as a serial in The Atlantic Monthly in 1896 and then as a book in 1897.

This novel describes the struggle between Mrs. Gereth, a widow of impeccable taste and iron will, and her son Owen over a houseful of precious antique furniture. The story is largely told from the viewpoint of Fleda Vetch, a young woman in love with Owen but sympathetic to Mrs. Gereth's anguish over losing the antiques she patiently collected.

Adela Gereth, a lover of beauty and passionate collector of fine objects, strikes up a friendship with the young Fleda Vetch, when both of them find themselves guests in the tasteless house of Brigstock family. Mrs. Gereth fears that her son Owen, an honorable but somewhat unimaginative young man, may take up with one of the Brigstock girls, and indeed he presently announces his engagement to Mona, the eldest daughter.

That means that Mrs. Gereth will have to leave Poynton, the beautiful house that she and her husband filled with the furniture, china, tapestries, and other objects that they lovingly collected over the years. It is not so much possessiveness that drives Mrs. Gereth to want to maintain control over them, but rather the sense that she will have failed if Mona, understanding and appreciating nothing of what Poynton contains, should become Owen's wife and take charge.

The story and its developing conflicts are seen largely from the point of view of Fleda Vetch, the young woman who, her moral and aesthetic sensibilities tuned perhaps as finely as any of James's protagonists, finds herself caught in the middle.