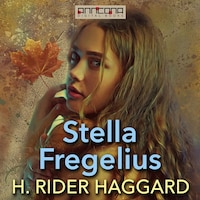 This is another of Haggard’s eternal love romances: that there are loves that survive beyond the grave, and that a spiritual connection is much more important than the physical and temporal.

This romance deals with the overlapping fates, a triangle, of 3 people in a northern coastal region of England: scholarly Morris Monk, inventor; his first cousin, Mary Porson; and the daughter of the new church rector, Stella Fregelius.

Following a shipwreck Stella is preparing to die but is unexpectedly rescued. A love triangle of an unusual sort develops where an inventor of a device that he calls an ”aerophone” (it seems, from the description, to be a bulkier version of today's ubiquitous cell phone), who is engaged, becomes involved with a woman who has a passionate mystical influence on him.

At the beginning of the novel, H. Rider Haggard deemed it necessary to offer an apology to his public. In this brief foreword, the author warns prospective readers that ”Stella” is not one of his typical tales, and one with ”few exciting incidents.” But Stella Fregelius  turns out to be one of his most beautifully written, deeply felt and truly romantic works.

Filled with warm and touching characters; featuring a few genuinely exciting scenes; and crammed with Haggard's thoughts on life, love, religion and the afterlife, Stella Fregelius is a wonderful read.

Allan Quatermain, the adventure hero of King Solomon's Mines and its sequel Allan Quatermain, was a template for the American character Indiana Jones, featured in the films Raiders of the Lost Ark, Temple of Doom, Indiana Jones and the Last Crusade, and Kingdom of the Crystal Skull. Quatermain has gained recent popularity thanks to being a main character in the League of Extraordinary Gentlemen.