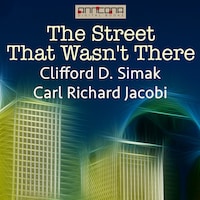 The Street That Wasn't There

The Street That Wasn't There is a science fiction short story by Clifford D. Simak and Carl Richard Jacobi first published in 1941 in the science fiction magazine Comet.

A science fiction short story about an invasion of earth, but in a subtle and unique way.

A lonely man, after spending twenty years as a recluse because of a book he'd written. is out on his evening walk and discovers that a shop he regularly visits is gone.

Not just closed, but completely vanished, as though it never existed. More disturbing, the road that it was on has also vanished. What used to span three blocks is now two.

Carl Richard Jacobi (1908-1997) was an American journalist and author. He wrote short stories in the horror, fantasy, adventure and crime genres for the pulp magazine market. He also produced some science fiction, mainly space opera. He was one of the last surviving pulp-fictioneers to have contributed to the legendary American horror magazine Weird Tales during its ”glory days" (the 1920s and 1930s).