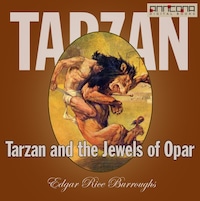 Tarzan and the Jewels of Opar

6h 43m
228 pages
NarratorRalph Snelson
TypeAudiobook, E-book
SeriesThe Tarzan series (part 5)
Categories
NovelsNovels
Share this book
Tarzan and the Jewels of Opar is a novel written by Edgar Rice Burroughs, the fifth in his series of books about the title character Tarzan. It first appeared in the November and December issues of All-Story Cavalier Weekly in 1916, and the first book publication was by McClurg in 1918.
In the previous novel Tarzan and Jane's son, Jack Clayton, a.k.a. Korak, had come into his own. In this novel Tarzan returns to Opar, the source of the gold where a lost colony of fabled Atlantis is located, in order to make good on some financial reverses he has recently suffered. While Atlantis itself sank beneath the waves thousands of years ago, the workers of Opar continued to mine all of the gold, which means there is a rather huge stockpile but which is now lost to the memory of the Oparians and only Tarzan knows its secret location…
Burroughs' novel served as a partial basis (along with The Return of Tarzan) of the silent film serial The Adventures of Tarzan (1921); subsequently it was the basis for the silent film Tarzan the Tiger (1929).
Tarzan is a fictional character, an archetypal feral child raised in the African jungles by the Mangani ”great apes”; he later experiences civilization only to largely reject it and return to the wild as a heroic adventurer. Created by Edgar Rice Burroughs, Tarzan first appeared in the novel Tarzan of the Apes (magazine publication 1912, book publication 1914), and then in twenty-five sequels, three authorized books by other authors, and innumerable works in other media, authorized and not.
Tarzan is the son of a British lord and lady who were marooned on the Atlantic coast of Africa by mutineers. When Tarzan was only an infant, his mother died of natural causes and his father was killed by Kerchak, leader of the ape tribe by whom Tarzan was adopted. Tarzan is his ape name; his real English name is John Clayton, Earl Greystoke.
Tarzan has been called one of the best-known literary characters in the world. In addition to more than two dozen books by Burroughs and a handful more by authors with the blessing of Burroughs' estate, the character has appeared in films, radio, television, comic strips, and comic books.
Edgar Rice Burroughs (1875-1950) was an American author, best known for his creation of the jungle hero Tarzan and the heroic Mars adventurer John Carter, although he produced works in many genres.