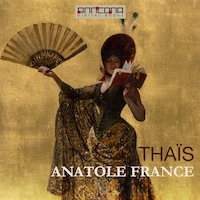 Thaïs is a novel by French Nobel laureate Anatole France published in 1890.

It is based on events in the life of Saint Thaïs of Egypt, a legendary convert to Christianity who is said to have lived in the 4th century. It was the inspiration for the opera of the same name by Jules Massenet.

The fourth century ascetic Paphnuce, journeys from his remote desert hermitage to urban Alexandria determined to locate the stunningly beautiful and libertine actress, Thais. He earnestly desires that she convert to Christianity.

Gaining an audience by deception, the hermit passionately speaks to the actress of eternity. Remarkably, Thaïs repents and retires to a convent for the rest of her days.

The hermit however, cannot rid his mind of her charms, not even with the help of the most severe austerities. After years of anguish the monk learns of Thaïs’ immanent demise and hastens to her side. There he confesses the unspeakable.

He was a member of the Académie française, and won the 1921 Nobel Prize for Literature ”in recognition of his brilliant literary achievements, characterized as they are by a nobility of style, a profound human sympathy, grace, and a true Gallic temperament”.