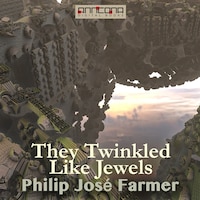 They Twinkled Like Jewels by Philip José Farmer is a science fiction short story, first published in 1954.

The story begins with Jack Crane lying in vacant lot. He seems a bit worse for wear, hiding from Bureau of Health and Sanity (Bohas) agents.

Jack Crane is trying to evade the authorities, but he isn’t succeeding too well. When he is finally arrested because of his homelessness, he is forced to go to a federal rehabilitation camp.

Along the way he meets an educated transient who explains to him about the high rate of schizophrenia and transients in the world. But the real problems start when he reaches the camp and comes into contact with a man who possesses something that Jack very much desires!

Philip José Farmer (1918-2009) was an American author, principally known for his award-winning science fiction and fantasy novels and short stories. Farmer is best known for his sequences of novels, especially the World of Tiers (1965–93) and Riverworld (1971–83) series. He is noted for the pioneering use of sexual and religious themes in his work, his fascination for, and reworking of, the lore of celebrated pulp heroes, and occasional tongue-in-cheek pseudonymous works written as if by fictional characters. Farmer often mixed real and classic fictional characters and worlds.