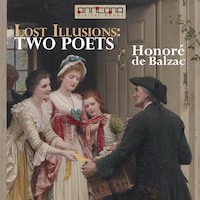 Two Poets (1837) is the first book in Balzac’s Lost Illusions trilogy, which is part of his sweeping set of novels collectively titled La Comédie Humaine.

The story is set in post-Napoleonic France, when the new bourgeoisie was jostling for position alongside the old aristocracy. We meet Lucien Chardon, a young provincial who romantically aspires to be a poet, and his friend David Séchard, who struggles to manage his father’s printing shop and falls in love with Lucien’s sister Ève. The picture of provincial life that emerges is laced with greed, ambition, and duplicity.

The two other volumes in the trilogy are A Distinguished Provincial at Paris (1839) and Eve and David (1843).

Balzac’s work was hugely influential in the development of realism in fiction, and indeed in creating our sense of 19th-century European culture. Oscar Wilde archly said, “The 19th century, as we know it, is largely an invention of Balzac’s.” The Lost Illusions trilogy is one of his greatest achievements, and is named in the reference work 1001 Books You Must Read Before You Die.