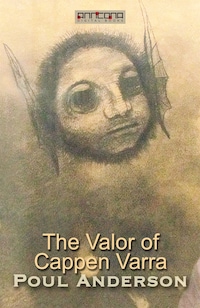 The Valor of Cappen Varra

The Valor of Cappen Varra is a science fiction short story by Poul W. Anderson first published in 1957.

”Let little Cappen go,” they shouted. ”Maybe he can sing the trolls to sleep—”

We have said that there are many and strange shadows, memories surviving from dim pasts, in this FANTASTIC UNIVERSE of ours.

Poul Anderson turns to a legend from the Northern countries, countries where even today the pagan past seems only like yesterday, and tells the story of Cappen Varra, who came to Norren a long, long time ago.

The Valor of Cappen Varra was first published in Fantastic Universe January 1957.