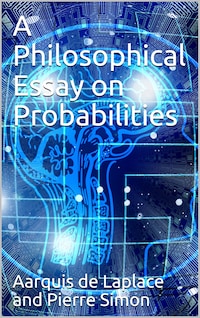 A philosophical essay on probabilities

179 pages
TypeE-book
LanguageEnglish
Categories
English
Share this book
This classic introduces the concepts and uses of probability theory. It demonstrates, without the use of higher mathematics, the application of probability to games of chance, physics, reliability of witnesses, astronomy, insurance, democratic government, and many other areas. It also shows how scientists can express complex ideas in simple terms.

In properly understanding Laplace’s A Philosophical Essay on Probabilities it helps to understand that the sharp distinction between science and philosophy was not made until the 20th century. Physics, for example, was referred to as natural philosophy in college curricula.

Because of this unmade distinction, Laplace combines mathematical understanding of probability theory, though in words not equations, with what we moderns would call philosophy, such as the credibility of miracles.

The mathematical portions of the book are hard reading, particularly for those without a background in probability, but there is enough philosophical or practical guidance to make the book interesting—even for the non-statistician.

Moreover, the book does contain the gradual human conquest of understanding nature and society by mathematical means. Since many phenomena admit of so many causes as to be unsolvable by classical physics, probability, and later statistics, enables one to identify patterns and make predictions even without a full causal explanation. All of this is well described in the works of Ian Hacking, such as the Taming of Chance.

A classic. A great mathematician explains his views on the foundations of probability without using any formulas, or Greek letters, not even pi. It does seem a little awkward though when he refers to a formula that uses the ratio of the circumference of a circle to its diameter. But generally, this is a well written book by one of history's great minds.