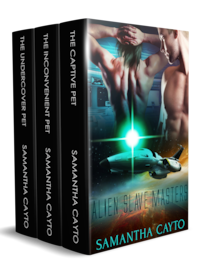 Frey Bjorkson is an orphan from New World Colony Five. While making a supply run, he’s been captured by a Travian privateer and kept as a pet. Brutalized, he fights to hold on to his sanity and hope of escaping. His hopes are all but dashed when his master loses him to another, scarier male.

Having lost his mate, Rone has given up his old military ambitions. Instead, he’s volunteered to pose as a privateer to root out the arms suppliers of the traitorous males trying to overthrow female rule. When he becomes the reluctant master to a human pet, he has little patience for caring for the scared, battered creature. That doesn’t stop him from wanting the boy, and, as he sets about claiming the human as his property, he finds himself getting in deeper than he’d intended.

Not only does Rone prove to be kinder, he also gives Frey his first experience with sexual pleasure. The way Rone makes him feel, physically and emotionally, confuses Frey. He fights against his growing attraction even while he struggles to learn just what his master’s true agenda is.

As Rone infiltrates the dangerous world of privateers, he reluctantly drags Frey in with him. He tells himself that he needs the cover of being a brutal slave owner, but there is no denying his growing need for the boy. As Rone’s mission heats up, the stakes are high, and the alien master and his captive pet will have to work together to survive.

Wen, a Travian cadet on his first mission, stumbles upon a secret settlement of humans and Travians on New World Colony Seven. Affable by nature, he’s still recovering emotionally from his traitorous lover’s near-fatal beating. When faced with the terrible decision to put himself back in the control of a powerful male, he chooses the imposing human who raises both his fear and his interest.

Jonathan Dax is a first generation space child from New World Colony One. Against his better judgment, he has become the liaison for the settlement. He doesn’t trust Travians, including the fetching youth who kneels before him, begging to become his ‘boy’. The idea of becoming anyone’s master is repugnant. He hates the way Travians have claimed human boys as ‘pets’ and is loath to mimic their ways, yet, he cannot deny that Wen appeals to him.

At first, both Dax and Wen consider what they do in the privacy of Dax’s quarters a form of duty and no more. But the intensity of the pleasure and the emotions they share are impossible to ignore. They must each overcome their past and prejudices to form a real bond. Within the bucolic settlement, however, sinister forces are at work, and they threaten to destroy Wen and Dax’s budding relationship.

Ben Miller has volunteered for a near-suicide mission. He’s been offered as a pet to a vicious traitor in order to infiltrate the Travian rebellion. His goal is to learn the identities of all the traitors so that the Empire can end the murderous scheme for good. Terrified but determined, he yields his freedom and virginity to the coldly brutal, yet surprisingly appealing Dane.

Kath, banished from his family due to a stupid indiscretion, has been given a chance at redemption. While gathering intel on the rebellion, he is whisked away by Dane for his personal pleasure. The unexpected change gives him a chance to really make a difference, so long as he can survive Dane’s use of him and his own growing desire for his master.

Having spent most of his life bored on his mother’s estate, Dane has found a way to make his mark. Donning the mantle of a murderous traitor, he seeks a way to bring down the rebellion. Using the boys under his control is a necessary evil. The pleasure he finds in them is both disturbing and unexpected.

Ben, Kath and Dane are hidden allies—if they can just learn to trust one another and use their growing affection for their common cause.