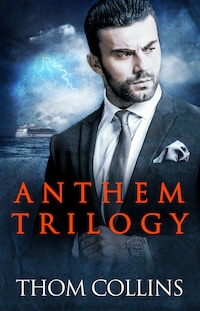 1 - Anthem of the Sea An ocean of possibility. For love, revenge and murder.

2 - Anthem of the Dark They thought the dark times were over. They were dead wrong.

3 - Anthem of Survival Will they ever escape the past?

When Daniel Blake meets Elijah Mann the attraction is instant. Handsome and talented, they are immediately drawn together. The perfect men for each other. Daniel has never been in love before. Most of his adult length has been focused on his career, first in a failed boy band, before cutting his teeth on the cabaret circuit and finally finding success on a TV talent show. At twenty-nine, he’s achieved more than most. The time is right to focus on his personal life. Tall, dark, sexy and funny, Elijah has it all and Daniel can’t resist him.

But a figure from Daniel’s past comes back into his life just as he meets Elijah. Jealous, bitter and twisted, Oliver Gill has never forgiven Daniel for his success. A success that was rightfully his. Fueled by hatred, Oliver’s actions set in motion a catastrophic chain of events that have far retching consequences for Daniel and Elijah, a threat not just to their happiness, but to their lives.