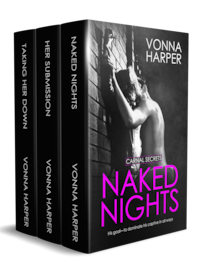 Freedom is everything to jockey Marina until an emotionally scarred man kidnaps her. His goal—to dominate his captive in all ways.

Tray spent years being viewed as a piece of valuable meat. Now it’s his turn to dominate. Teaching the lovely trainee to embrace a new way of life excites and challenges him. He will change her! Make her his.

They begin as strangers, one dominant, the other a naked captive. Will Marina continue to see Tray as her captor or will he become something more—something that transforms both of them?

Dominant Reno has found what he’s been looking for, a woman he can force to be his submissive. Whatever it takes, he will succeed.

Kaci lives alone, dreams alone. Her traumatic past is behind her, her future faced one day at a time. Her nights are filled with fantasies of dark erotica about being under a shadowy master’s control, but no one will ever know.

Then she’s spotted by a scarred Dominant who understands the look, smell, and taste of submissive need. Reno wants her and what Reno wants, he kidnaps.

Her Submission examines the appeal of capture fantasies complete with forced submission, power and weakness, strength and vulnerability, being owned and used. And ultimately—sexual fulfillment.

Controlled by a man ruled by dark forces, what was domination fantasy becomes Shana’s reality. There’s no escape. Only submission.

What she doesn’t know is that the man waiting for her is controlled by dark forces. He can’t fight his compulsions and doesn’t want to. He’s no actor hired to fulfill women’s submissive fantasies. Instead, he’s at the island because something beyond his control is turning him into a Dom, a Master. He must feed his carnal desires.

When a storm hits, he becomes wild. Savage, even. A man who knows a natural submissive when he handles her.

This is no game for him. He won’t let her escape.