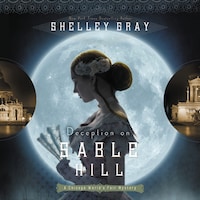 A high-stakes mystery of romance and intrigue that takes place in the Gilded Age of Chicago.

It’s mid-September 1893 and Eloisa Carstairs is the reigning debutant of Gilded Age Chicago society. To outsiders she appears to have it all. But Eloisa is living with a dark secret. Several months ago, she endured a horrible assault at the hands of Douglass Sloane, heir to one of Chicago’s wealthiest families. Fearing the loss of her reputation, Eloisa confided in only one friend. That is, until she meets Detective Sean Ryan at a high-society ball.

Sean is on the fringes of the Chicago elite. Born into a poor Irish family, becoming a policeman was his best chance to ensure security. Despite social boundaries, he is enamored with Eloisa Carstairs. Sean will do anything to keep her safe—even if he can never earn her affections.

Eloisa longs to feel normal again, but a killer is on the loose. In the last month, three debutants have been accosted by an assailant wielding a knife, and Eloisa fears for her safety at every event she attends. As the danger in the city increases, and as the romance between Eloisa and Sean blossoms, they both realize they want to be seen as more than how the world views them. But will they catch the killer before all their hopes come crashing down?

“Shelley Gray writes a well-paced story full of historical detail that will invite you into the romance, the glamour . . . and the mystery surrounding the Chicago World’s Fair.” —Colleen Coble, USA Today bestselling author of Rosemary Cottage and the Hope Beach series