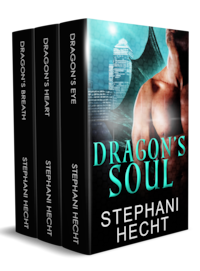 After a decade of living under the iron rule of a sorcerer, dragon shifter, Duncan Moore finally has his chance for freedom. With his former master dead, all Duncan has to do is steal the very thing that has been holding him captive all these years, his dragon's eye. The stone holds his magic and his dragon self and without it, he can never go home again.

What should be an easy theft turns complicated when he finds that someone has beat him to the eye and he has no idea where it could be. To add to things he suddenly finds himself teamed up with the dead sorcerers' son, Trent. For years Duncan has longed for Trent, but had never dared act on his desires. Then one night of passion between the men changes everything and Duncan realises that he could lose something far more valuable than his dragon's eye, he could lose Trent.

Will Duncan be able to save them both? Or will he have to make the ultimate sacrifice?

Sometimes you have to face your horrible past or else you will never have a bright, happy future.

Lester has always been only half good enough—half a sorcerer, half a dragon, but all a bastard, he was shunned and unwanted as a child. So, the first thing he does when he can is move away to the human world, and he never looks back. But the supernatural world is coming to him. The war between the Dragons and the sorcerers is at its climax and both sides want Lester on their side.

Dragon shifter Mick grew up watching his best friend Lester being abused and shunned. Now that he's back, Mick is more determined than ever to protect him. As the two find themselves falling in love, will they be able to overcome all their obstacles, or will war win over love?

Sometimes, to save another, you have to look at your own weaknesses first.

Ever since Nicholas saw the small Dragon in chains in the scrying bowl, he knew that he had to save him. For some reason Nicholas is drawn to the other man and he won’t rest until he knows he’s safe.

Tommy has been a captive from the day he was born. When he is rescued by Nicholas he feels an instant connection to him. But Tommy is afraid to let his guard down and let anybody get close to him.

Can Tommy overcome his abusive past? Or will it doom him and Nicholas from finding love?