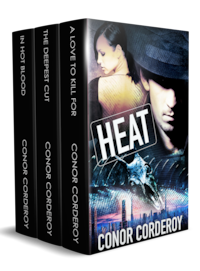 The Heat Series: A Box Set

A Love to Kill For

For Murdoch, women are bad news. Trying to stay alive in war-torn Andalusia, tracking a vanishing femme fatal, hunted by The Brotherhood, the last thing he needs is love…

In Liam Murdoch’s world there is no room for love, only the thrill of the game and the fast buck. So when a fascinating client persuades him to be the bagman in a blackmail payoff and he winds up with a bag full of fifty grand in cash and a box whose contents are worth more than that, Murdoch smells the chance to make a stash.

As Europe slides into bloody chaos, Murdoch must travel to war-torn Andalusia in search of the elusive Mary-Jane Carter and the even more mysterious Sinead Tiernan. He must get the answers only they can provide about the box and the sinister Brotherhood of the Goat, who are hunting for it. But once there, what Liam finds is the last thing he needs—love—and his world turns upside down. Instead of chasing cash, he’s fighting to save the life of the woman he loves.

Suddenly nothing and nobody is what they seem to be, and Liam finds himself fighting not only a mysterious enemy he cannot understand, but also his own turbulent feelings. He must battle to save a priceless treasure for humanity and the woman he’s learned to love from a fate far worse than death.

Murdoch never wanted to love, but once he learned to, someone stole his woman. Now—whoever they are—he wants to make them pay.

A young woman has just been brutally murdered by a serial killer. Her father is the supreme crime lord in London, and he wants Murdoch to find that killer. But Murdoch has promised Maria he is done with his old life. Then his best friend’s niece is killed in the same horrific way, and he knows the killings are a message—for him. But from who? Someone is out to get him—and the woman he loves.

His search leads him into the darkest reaches of the serial killer’s mind. But when he thinks he has his man, things take an even more sinister twist. Suddenly, he is in a desperate chase across Spain and into Morocco and Algeria. The prize is Maria’s life, even at the cost of his own sanity.

Because what he finds there is too horrific to believe.

They betrayed him then took his woman and his child. Now they want his world, but Murdoch is hitting back in hot blood.

When Catherine Howard comes back like a ghost from Murdoch’s past, she intends to do more than just haunt him. Her lies are like a poison that infects even his closest and oldest friends. Suddenly, Murdoch finds himself betrayed and alone, fleeing across two continents, fighting the odds to save the woman he loves and his unborn child. His only allies are a deadbeat college dropout with a schoolgirl crush and the fire in his own blood.

But in Murdoch’s world, nothing is ever what it seems. In a journey that takes him from the House of Lords in London to the Pentagon in Washington DC, via Gdansk, San Francisco and a string of desert motels. If Murdoch sets one foot incorrectly or puts his trust in the wrong person, the whole world will pay the price.

The question is, who is the wrong person? As the final battle approaches, can Murdoch even trust himself?