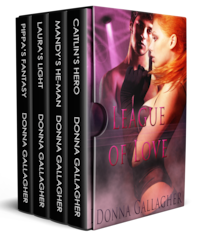 League of Love: Part One

Falling for him is easy. Dealing with his high-profile life—a life deemed public property by his fans and the press, plus an ex-wife out for blood—now, that's the hard part.

Twenty-year-old Caitlin Walters was living a normal life. She attended university, socialised a little and had a good relationship with her mother and stepfather. But when her parents are tragically killed in a car accident, Caitlin's life is forced to change. The once carefree girl becomes sole guardian of her stepbrother. Giving up her university course to support and raise eleven-year-old Riley, Caitlin struggles to deal with her new responsibilities.

Her job, singing at a local Italian restaurant, brings Caitlin some peace. On stage, she leaves her life and its troubles behind. Feeling comfortable and sensuous, she is like a siren calling out to lost souls. It's on one of these nights that Caitlin begins a romance with Australian Rugby League captain, Brodie James. Brodie, not content with his so-called perfect life and struggling with commitment issues following a disastrous marriage, falls hard for Caitlin.

The relationship does not run smoothly for the self-sacrificing Caitlin, as she learns how to deal with Brodie's nasty, jealous ex-wife, a muck-raking reporter and intrusive but well-meaning rugby fans. Along the way she makes new friends, and awakens the untapped sensual desires of the woman inside.

Can this rugged mountain of a man really protect her, teach her to trust and love again? Or will the choices she's made in the past destroy her future?

Having managed to break free from an abusive relationship with a cruel and dominating ex-boyfriend, Australian artist Mandy Magenta—a.k.a. Amanda Smith—should be terrified when she first meets the enormous bulk that is Jonathon 'JT' Thomson. He is fierce. Not only is JT the biggest, most muscular man Mandy has ever set eyes on, but he makes a living playing the brutal sport of Rugby League.

So why, then, does Mandy's body go into lust overdrive at the mere sight of him? She doesn't feel a hint of alarm as the colours that exist in her mind, created and inspired by her own emotions and her artistic talents, explode with vibrant and passionate intensity. Could JT be the man to remind her that she is still a sensual, amorous woman, a woman deserving of love and tenderness—and can he protect her from the threats her ex has promised to deliver on?

A much sought-after, successful career hasn't been enough to bring happiness to his life—is it possible that one woman can light up his darkness?

Forty-two-year-old single mother Laura Harris has devoted more than half her life to raising her son. She remembers the concept of having sex but it's been aeons since she's actually been a participant—especially with a real flesh-and-blood partner. But it's time to reclaim her life. Her son is a man now, and the rising star of the Jets Rugby League team.

Their future is brighter than ever and, for the first time, financially secure. But Laura is starting to think agreeing to have dinner with Trevor Hughes could be biting off more than she can chew. Not that she can't see herself taking a nice big chunk from the absolutely gorgeous, thirty-four-year-old sports-commentator's rump—he's one prime piece of masculinity! She just isn't sure how or when the whole sex thing will become an issue. She can't even get past the what-to-wear step, let alone reach the when-to-take-it-off stage…

Trevor Hughes usually avoids woman with substance—he has enough of his own demons to deal without trying to care for anyone else. But there's something about the upbeat, sexy, one-woman dynamo Laura Harris. The woman is pure sunshine and happiness, and that's surprising when you look at what life has handed her. Nothing seems to dampen Laura's spirits, and she quickly becomes someone Trevor needs in his life… until misunderstandings come between them. Can Trevor put things right?

What's a girl to do when her fantasy is within reach? Grab it with both hands, of course—then try to live with the consequences.

He was her childhood crush, her fantasy man. Pippa spent her teenage years surrounded by players from the Sydney Jets rugby league team, the fit and muscular bodies that made up the team her father used to coach an ever-present part of her formative years. But he is the only one of that group of high-profile men who has ever caught her interest. From the moment Pippa first set eyes on the handsome future star, he owned her heart. Mitchell ‘the Rookie' Harris sauntered into her life and nothing has been the same since.

The problem for Pippa becomes twofold when she meets Rook again after years apart. Now there is the moral dilemma that, as she is signing on as physiotherapist for the Jets team in a few days, she is fully aware of the 'no fraternisation' rule. But then there's the reality that her heartthrob of so many years and dreams has no clue who she is, doesn't recognise her as the young girl whose heart he crushed years before when he refused her naïve advances. He wants her, and this could be her only chance to finally get Rook out of her system once and for all.

Now Pippa must decide, and quickly, whether to risk everything she's worked for. Will living her fantasy be worth the inevitable fallout?