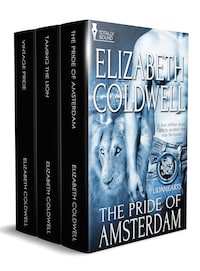 The Lionhearts series: Part One

The Pride of Amsterdam

When an ancient enemy is summoned to destroy his pride, a lion shifter must fight to protect the man he loves.

Kees van der Veer has never forgotten the mysterious stranger who seduced him on Millennium Eve and who promised that when the time was right, they would be together again. Returning to Amsterdam after fifteen years away, he is reunited with that stranger, entering into a world of love and danger he could never have imagined.

Arjan is a lion shifter, part of a pride who has lived in Amsterdam since its Golden Age. He has spent fifteen years regretting the need to drive his destined mate away after one night of blissful passion. But only once they meet again can he reveal to Kees the truth of his heritage. When an old enemy is summoned to destroy the pride, Arjan must act to protect not only his family but also the man he loves.

Will he sacrifice everything for the sake of his human mate?

Thwarted in his efforts to become head of the Amsterdam pride of lion shifters, Kaspar de Wit flees to England. He finds himself in Bath, home of the biggest English pride, and begins to make a new life among friends. What he doesn’t know is that he’s moved to a city steeped in bloody ritual. Destiny seems to have drawn Kaspar to the place where he’ll meet his mate–but does something more horrifying lie in wait for him, too?

Jon Fellowes, professor of archaeology at Bath University, is obsessed with the standing stones that dominate the Somerset landscape and the people who raised them. He’s heard tales of strange creatures, half-man, half-lion, that once roamed the land, but dismisses them till he meets the beautiful Kaspar and learns the bizarre truth of his nature. As an ancient rite is revived and terror stalks the countryside, can Jon and Kaspar overcome the natural distrust between humans and shifters to find true love? Or will one of them be forced to make the ultimate sacrifice?

He doesn’t believe in the paranormal. Can a gorgeous shifter prove him wrong?

Ethan Wayne is a paranormal investigator for the hottest reality show on TV, Spirit Seekers, but his love life is decidedly lukewarm. Reeling from a sudden break-up, he finds himself heading for France, where his team will be exploring the Château LeBlanc, searching for the ghost of a murdered kitchen maid. When he meets the château’s reclusive owner, Jean-Luc LeBlanc, the attraction is fierce and instant—but Jean-Luc is keeping secrets the skeptical Ethan could never have imagined.

Jean-Luc’s world collapsed with the death of his beloved Benoît. He no longer cares about producing his award-winning Champagne and even his closest family members can’t rouse him from his self-imposed solitude. The last thing he wants is a team of ghost hunters intruding on his privacy and discovering the truth of his nature. The realization that one of these brash Americans is destined to be his new mate seems like a sick joke. But soon Jean-Luc has bigger things to worry about than his distrust of humans. His home and family are under threat—can he do what it takes to save all he holds dear, and let Ethan into his heart in the process?