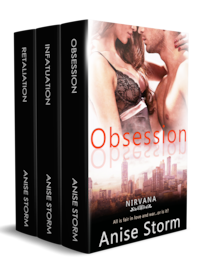 The ultimate bachelor meets his match when he sets out to seduce his secretary. What starts off as fantasy soon becomes an obsession.

Thaddeus Remington has everything he has ever wanted—a successful business, wealth and the ultimate bachelor lifestyle—until he meets his new secretary, Hannah Brinkley. Immediately he is intrigued and drawn to her, unaware of the side she keeps hidden until he sees her one evening at a local Atlanta kink club. Intending to turn his fantasies into reality, he sets out to seduce her.

Hannah Brinkley, a transplant from Texas, is unable to resist the lure of once again finding pleasure at the hands of a Dominant and becomes a member at a local club. Once there, she realizes that the man who flirts incessantly with her throughout the day is actually in a position to back up each and every naughty suggestion.

Physical attraction soon leads to a full-blown obsession that leaves them not only questioning each other but also searching their own hearts. Will the answers revealed bring them closer to experiencing nirvana in each other’s arms or tear them apart for good?

Fate gives Hannah Brinkley a second chance with her one-time infatuation until the secret she harbors threatens to tear it all apart.

Fleeing the arms of one dynamic corporate tycoon, Hannah Brinkley crosses the Atlantic into the arms of another, who is equally as dangerous to her heart as Thaddeus Remington. Unlike the man she left behind in Atlanta, Hannah shares history with Finley Wetherall and those old feelings for him return once again.

Successful, powerful and hung up on the girl that got away, Finley is determined to fight for Hannah’s heart and do whatever is necessary to keep her. Years before, he was hesitant to make his move for fear that she couldn’t handle his dark desires, but when she turns up on his doorstep, it has to be Fate. He will allow nothing and no one to stand between Hannah and their destiny.

He soon finds out that he isn’t the only one harboring secrets. Will Finley be able to break down the walls Hannah has built around herself, or will she instead allow the ghosts of her past to destroy what they’re currently building?

Secrets are exposed when two business rivals discover they have fallen for the same woman. All’s fair in love and war…or is it?

When past and present collide, Hannah Brinkley is torn in two romantic directions. By the time she realizes she isn’t the only thing at the center of the power struggle between two Dominants, accusations of corporate espionage threaten to rip her world apart. The possibility of prosecution is nothing compared to the realization that she’s lost the two loves of her life. Grappling with the emotional pain, she has nothing left to lose and sets out to clear both her name and her conscience.

Stung by a woman’s alleged betrayal, Finley Wetherall and Thaddeus Remington are determined to destroy one another, until they discover Hannah has put herself in grave danger. Now the two Dominants are in a race against time to determine whether they can actually put their own differences aside long enough to save her. If she’s rescued, will either man be able to walk away from her again? And, if not, will she be able to choose one over the other?