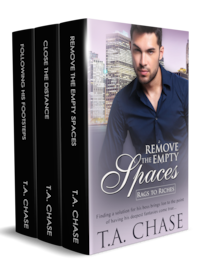 Rags to Riches series: Part One

Finding a solution for his boss brings Ion to the point of having his deepest fantasies come true.

Being a mailroom clerk is a stepping stone for Ion Vasile. He doesn’t plan on working in the basement at Bellamy International forever. Ion spends a lot of his time fantasizing about Adrien Bellamy, CEO and President of the company. He’s sure Adrien doesn’t know he exists.

Adrien Bellamy does know Ion exists. Even with all his money and power, Adrien isn’t sure Ion would want to go out with him. So he keeps his distance from the gorgeous mail clerk.

After Ion finds a solution to a troubling acquisition, Adrien takes a chance and asks him out. Their attraction runs red-hot, and a serious relationship becomes a possibility. But first they have to deal with their families and the differences pointed out between them. Adrien must find a way to convince Ion his lack of money and name doesn’t mean anything because Adrien loves him no matter what.

Being in love isn’t always roses and sunshine.

Ion Vasile and Adrien Bellamy start dating and fall in love quickly. As their relationship grows stronger, Ion discovers the fragility of his family ties. As his mother turns against him and his brother seems to be supporting her, Ion begins to lean more and more on Adrien.

Adrien wants nothing more than to be strong for Ion and share his own family with him. Yet he’s afraid they’re moving too fast. He doesn’t want to scare the most marvellous man he’s ever met away.

When tragedy strikes, they both realise life is too short to let fear rule their choices.

Being just like his father is what scares Winston the most.

Winston Tennant came to New York to work. After burying himself in his job for the several years, he’s afraid he’s becoming like his father. Cold and indifferent, Winston’s father only wanted his son as a way to continue the family line. When Winston came out, he was disowned. His best friends do their best to keep him from his father’s fate. And when Winston meets Patrick Gaverson, he thinks he just might have found the man who can take his mind off his work.

Patrick Gaverson never imagined that Winston Tennant, head of the London office of Bellamy International, would be interested in a mere personal assistant like him. Yet after a not so subtle set-up by his boss and his best friend, Patrick finds himself on a date with Winston. He discovers that Winston is a lot more down to earth than Patrick thought.

Falling in love so quickly shouldn’t be easy, but Patrick’s willing to take a chance that it will last more than a week.