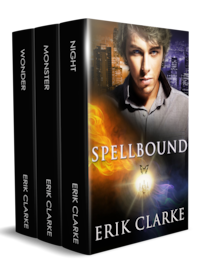 Given the powers of an Incubus, could you resist the urge to take the one man you’ve always secretly wanted?

Or so it seems to Cole Turner, a Seer who can See everyone's future except his own, when a gift from his Dreamwalking best friend Luke turns his world upside down. Overnight, Cole gains all the allure of an Incubus, drawing suitors to him like moths to a flame. But after a few days of revelling in the fun, reality takes a turn—the mysterious drug he took, known only as "Night", had to come from someone, and that someone is pissed, on a homicidal scale. Each sexual encounter makes Cole’s attraction grow stronger, making it ever-more difficult to just walk outside. And Luke, the Seer's go-to in times of need, now wants him like everyone else, a point made even worse by the secret desires Cole has for the friend he had always assumed was straight.

Swamped in sex, powerless to See if the future holds any hope for salvation,  and at constant risk of losing both his best friend and his life,  Cole is about to find out if he's strong enough to beat the Night racing through his system—and if his relationship with Luke is strong enough to survive it as well.

Scarred. Resentful. Alone… Six years away from Max may have changed Syler too much for him to risk rekindling their relationship.

Syler Rike is a Fire Elemental and a Hunter—a member of the magical law enforcement. He’s one of the best, forced to face off against the most brutal criminals in the world. Of course, he’s also an asshole who couldn’t care less about the rules, but Syler loves his job… Even though the years have taken their toll, and he’s had to leave a lot behind.

One of those things was Max York, his Were-Shifter ex-boyfriend. When Syler left him without a word six years earlier, he figured he’d never see the man again. But now, after yet another covert-breaching show of magic in front of humans while Hunting, Syler’s been put on probation. He’s banned from using any spell-work until a trial can determine if his powers will be taken away permanently. To make things worse, he’s dumped in the town of Kelvinunder the watchful eye of Will and his Vampire clan until he’s given a verdict. When he runs into Max there for the first time in years, it’s hardly the reunion either had expected.

Time has changed each man more than the other could know. Forced together by their circumstances, secrets and pain come to a head. Meanwhile, something big is happening in Kelvin, something everyone is determined to keep Syler from finding out. His trial looms, his relationship with Max has never been worse, and he can’t even use his magic. Has too much changed for them to get back what they had?

To find out the truth and join with his Vampire mate, Blake may have to pay a steep price—his sanity.

It’s not that Blake Hollister doesn’t want to be the mate of the town’s resident hottie Vampire, Adam Harkin—just the opposite. With everything else in his life going to hell, that’s the one thing that Blake wants more than anything. But fate has other ideas. Blake is Dormant, meaning his magical powers never manifested when he came of age, leaving him doomed to be forever connected with magic, but never able to access it. Sex between magical beings and non-magics is risky at first and becomes exponentially more dangerous, and Adam isn’t willing to harm his mate, effectively pausing their relationship until some solution can be found.

At the same time, darker things are manifesting in Kelvin. Secrets buried in the ruins of the town’s old amusement park, Wonderworld, threaten to destroy the fragile peace. And when Blake finally convinces Adam to give sex a shot despite the risk, the destructive effects on his mind that he tries to hide threaten to drive him insane. Blake’s once structured life begins to shatter—days turn into fractured memories of events he can’t be sure really occurred, a broken slideshow of nightclubs, theme parks, and torrid sex. Dreams and reality, past and present, betrayal and loyalty are all on a collision course, and at the center stands the mercury-eyed fantasy whom Blake is beginning to think he might love—if the long-forgotten truth about Adam’s brutal change from human to Vampire doesn’t turn the entire town against each other first…