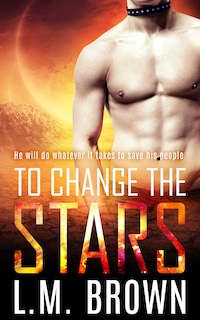 To Change the Stars

Jessiah will do whatever it takes to save his people—lying, spying or even selling his body.

A book written hundreds of years ago holds the key to the future of the last survivors of the human race.

Growing up in a massive underground cave network, Jessiah has never known any other world. When he discovers the existence of a time portal, he enlists the help of his friends to expose the truth about the greedy scientists who control it.

Garrett has no head for science and struggles to earn the respect of both his peers and his father.  With a taste for parties and whores, Garrett is the chosen target for Jessiah and his friends to gain access to the laboratory containing the time portal.

Impatient and impulsive, Jessiah decides to move things along at a faster pace by playing the role of a prostitute to get close to Garrett.  He is prepared to sacrifice his virginity for their cause, but he doesn’t plan on falling for Garrett in the process.

With the future of the human race in the balance, the stakes for humanity are high. With his heart on the line, the risk Jessiah takes might be even higher.

Only together can Jessiah and Garrett change the stars of everyone in the caverns.