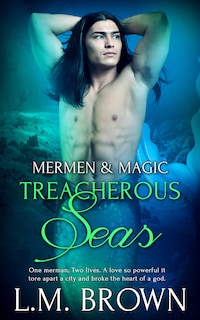 One merman. Two lives. A love so powerful it tore apart a city and broke the heart of a god.

Caspian, the Atlantean God of Justice, has devoted his eternal life to protecting the merfolk. He has no time for romance, not even when the merman he now watches over is his former lover reincarnated.

Phoebus, a merman living in the sunken city of Atlantis before the Atlanteans were banished, never intended to fall for Caspian, the most promiscuous of all the gods. Yet, when Caspian offers him immortality, Phoebus doesn’t know if he can pay the price, even if refusing means breaking the heart of a god.

Back in the present, Marin remembers the love he once had for Caspian, but he’s not the same merman now. Caspian might have loved him as Phoebus, but he knows the god cannot give him what he needs.

Marin doesn’t want Caspian’s protection. He wants revenge, and he is prepared to make the ultimate sacrifice to get it, even if it means breaking Caspian’s heart a second time.