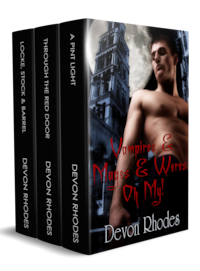 What's a vampire to do when every day is the same old dull quest for blood? Head to Maui, of course. But before Valerian can hit the beach, he needs to get rid of the sultry mage seducing him in his sleep. She may have fooled his subconscious, but he doesn't need a mate complicating his life. Imagine Val's shock when he finds out she's a he, yet still has the power to arouse him beyond anything he'd ever imagined.

Raine faints at the sight of blood and isn't looking forward to being a vamp's chew toy. Still, family duty calls, and Valerian turns out to be the hottest, and most powerful, male on two legs. Raine is crushed when the sexy vamp of his dreams runs from their rough play in horror. But his pride can't stand in the way when Valerian accidently steals his magic along with his blood.

Now, with time running out, Raine needs to seduce him one last time to even up the score, and maybe this time, they'll exchange more than blood and power. Magic is in the air, and sometimes love only needs a little nudge.

Through the Red Door

Just a demon's luck. Seth finally finds the perfect house…and it comes with an angel.

The last thing that demon Seth expects to come across while househunting is an injured angel…especially one who has no idea he's anything but human. Every instinct in him wants to stay far away, but Kyrian is being targeted by another demon, and Seth reluctantly finds himself playing guardian to the irresistible male.

Kyrian has no idea what is 'haunting' his house, but after he breaks his ankle being shoved off the deck, he's had enough. Strong, handsome Seth is a godsend, making him feel safe and secure. But he alludes to secrets that will test everything Kyrian believes…and turns the tables on just who needs protecting.

Faint heart never won fair…mage? What's a werewolf to do when his mate runs away? Chase him, of course

Aspen, a master mage, has loved his foster sister Brie for years, but now that she's been forced to become an acolyte, the only way to ever win her is to find another source of the power their faction needs before the new moon. Seeking information about the were, Aspen walks into Locke's café and finds what could be the solution to everything. He could finally have Brie…but sometimes what you think you want and what you get are two very different things.

Locke is shocked when Aspen walks into his life. He'd always been told that as an omega, he would never have a mate. But the joyous occasion is marred by his banishment from the only life he's ever known, and even worse, Aspen has disappeared. Now, with nothing more to lose, he must track down his wayward mage. But trouble has beaten him there and unless he acts quickly, Aspen could be killed. And that's not even the worst possible outcome…