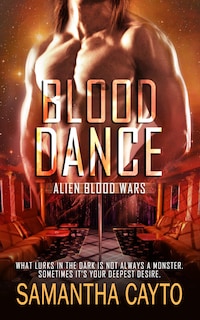 What lurks in the dark is not always a monster. Sometimes it’s your deepest desire.

A thousand years ago, Alex captained an alien ship that crashed on Earth. Stranded, he has tried to keep his men together while forging a new life. He’s locked into a never-ending war with mutinous crewmembers that makes unsuspecting humans collateral damage. That humans mistake them as vampires is all to the good. Humans are still not ready to learn that aliens live among them. Alex has finally found some peace running a private club, but the memories of a human—loved and lost—keeps him alone.

Quinn Cooper was kicked out of his family when he came out as gay. Having traveled to Boston, he takes a job in Alex’s club. His boss and the men around him are large, scary and hard to ignore—as is his instant attraction to Alex. Becoming involved with the boss is always tricky. There’s something about Alex, however, that’s too sexy and compelling to ignore.

Knowing that seducing the vulnerable and virginal Quinn is a bad idea, Alex tries to keep his distance. He’s also trying to protect the boy and everyone else when the traitorous crew once more stirs up trouble. Alex’s and Quinn’s growing attraction leads Quinn closer to the frightening truth of whose bed he shares, while putting him in unfathomable harm’s way. Alex has to find a path forward to end the alien war for good or risk losing another love.