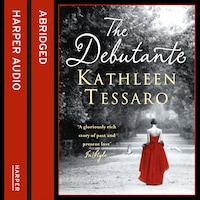 Can the secrets of one woman’s past change another woman’s future?

Endsleigh House stands, crumbling and gracious, on the south-west coast of England, its rooms shut up and dusty. But what secrets do they hold?

Cate, an exile from New York, is sent to help value the contents of the once-grand Georgian house. Cataloguing its' contents with Jack - a man with his own dark past, she comes across a hidden shoebox containing an exquisite pair of dancing shoes from the 1930s, along with a mysterious collection of objects: a photograph, a dance card and a Tiffany bracelet.

Returning to London, rather than face the questions lingering in her own life, Cate immerses herself in piecing together the clues contained in the box to uncover a story, that of Irene Blythe and her sister Diana - two of the most famous debutantes of their generation.

The tale that unfolds is one of dark, addictive love, and leads Cate to face up to secrets of her own. Can the secrets of Baby Blythe's past change Cate's own ability to live and love again?