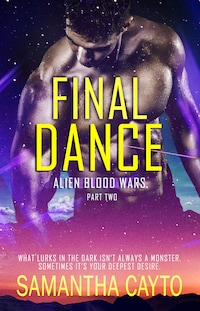 After a thousand years of fighting, the war between the alien factions is coming to a conclusion. The outcome will determine the fate of the world. And while Alex and Dracul fight for supremacy, Annika has her own secret agenda.

Craig Jefferson is a vice cop who has been thrown into the surreal world where alien vampires are locked in a struggle to dominate his planet. After witnessing the massacre at Club Lux, he has thrown his lot in with Alex’s crew, determined to help save his species. His decision is bolstered by his inexplicable attraction to one of Dracul’s victims. The shy, abused man is not his usual type, but keeping him safe becomes Craig’s mission.

Alun survived centuries of abuse, only to find himself a different kind of captive. Being useful and staying on the sidelines is the only way he knows. The re-emergence of his faith, as well as a surprising attraction to an American cop, is giving him the courage to break free of his past and his present. If only he could save his son from Dracul, he would see a future for himself once again.

Craig and Alun are mere cogs in the battle gearing up, but they are determined to play a role, even as they tentatively explore a life together.