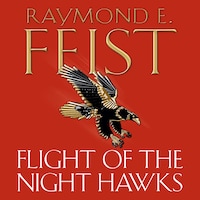 Flight of the Night Hawks

The first book in the Darkwar series, from world-wide bestselling author of Magician, Raymond E. Feist.

The Conclave of Shadows, the undercover organisation charged with the protection of Midkemia, have problems: the evil magician Leso Varen is still at large and thousands of portals to a parallel dimension inhabited by the cruel and fiendish Dasati, have been discovered in Novindus.

Leso Varen, a powerful and malign magician with the power to possess and transport himself from body to body, and his Nighthawk assassins are plotting chaos and annihilation in the royal house of Kesh. The Nameless One is awakening and needs Varen to help him re-emerge completely and tip the balance of good and evil in the world, plunging Midkemia into darkness and ruin.

But when the Conclave attempt to warn the Emperor, it becomes clear that many of the truebloods – nobles related by birth to the Emperor – are already Varen's slaves, both willing and unwitting, and the Conclave are forced into a race against time to save Great Kesh before evil engulfs the land.

Flight of the Night Hawks begins a brand new series from the master of fantasy, set on a grand scale; revisiting the exotic political-intrigue of Great Kesh (touched upon in the classic Riftwar books), and carrying the reader into a dark underworld of crime and black magic.