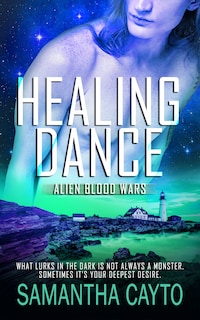 What lurks in the dark is not always a monster. Sometimes it’s your deepest desire.

Having survived brutal centuries as Dracul’s slave, Dafydd is pulling his life together. He has accepted his role as father to baby Idris and is determined to raise this son without the evil influence of his alien blood. Trauma still affects every aspect of his daily life, however, and he struggles to cope with it in dangerous ways. He also cannot quite shake the appeal of the human doctor who saved his life.

Ric began his journey with the aliens out of medical curiosity. After his adventure in Wales, he can no longer dismiss how it has become personal. He knows Dafydd is not ready for any kind of relationship, but the lure of courting him is something Ric cannot resist.

When a new problem crops up in the Boston crime world, the aliens are forced to explore the possibility that it is more than human-based. Their journey of discovery ropes in both Dafydd and Ric, throwing them together and forcing them to face their attraction and their demons.

Malcolm is along for the ride with Brenin, who, like Dafydd, is dealing with his own PTSD. The four of them must lean on each other to find a way past the lasting damage visited on them by the monster.