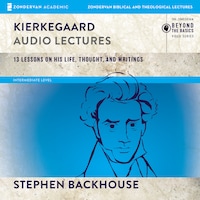 The Zondervan Biblical and Theological Lectures series provides a unique audio learning experience. Unlike a traditional audiobook's direct narration of a book's text, Kierkegaard: Audio Lectures includes high-quality live recordings of college-level lectures that cover the important points from each subject as well as relevant material from other sources.

Gain a new understanding of Kierkegaard's thought and life, a story filled with romance, betrayal, humor, and riots, in Kierkegaard: Audio Lectures.

Søren Kierkegaard indeed lived an extraordinary life. He never saw the fruits of his work in his life--it would be almost 100 years after his death that others would unleash his words onto the wider world. Yet the Danish philosopher, theologian, social critic, and writer is now widely recognized as one of the world's most profound writers and thinkers, and his influence on philosophy, literature, and on secular and religious life and thought is incalculable. Philosophers and theologians influenced by Kierkegaard include Karl Barth, Emil Brunner, Albert Camus, Jean-Paul Sartre, Thomas Merton, Dietrich Bonhoeffer, Kafka, Martin Luther King Jr., and numerous others.