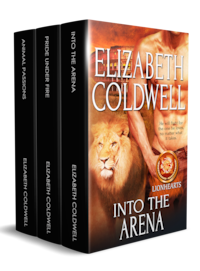 He will fight for the one he loves, no matter what it takes.

Cesare Bianco is a shifter without a pride. Exiled from his home town of Padua after losing a leadership fight to his corrupt, self-serving uncle, he travels to Rome in search of a new beginning. A chance meeting sees him taking a job on the catering crew of a Hollywood blockbuster. When he meets the movie’s handsome lead actor, Hayden, he knows he’s in the presence of his mate. But Hayden is human. Even though he offers the possibility of lasting love, Cesare must fight all his instincts to make it happen.

Hayden Skarz is on the verge of the big time. Landing the lead in sci-fi adventure Thrown to the Lions has put him on the road to stardom. Filming in Rome is a difficult new challenge for him, though being around Cesare, the hunk who works in the catering truck, makes his job much sweeter. Sex between them is passionate and wildly inventive. But Hayden has a stalker, who’s tired of being ignored in favor of other men. When what started as a crush turns into murderous obsession, can Cesare help Hayden make it off the film set alive?

Will their passion burn out of control?

Connor Wabsik’s career as a firefighter is on the line after he punched out his commanding officer. Redemption is possible in the form of a move to a sleepy California mountain town, but it will mean leaving his old life behind. What he doesn’t know is that his destiny waits for him in Riesgo. Fate has paired him with a human mate, Andy McGuire—a man with secrets of his own. Connor is fighting to protect the town from a dangerous firestarter. When Andy’s life is threatened, will Connor be able to keep him safe, too?

Detective Andy McGuire is unlucky in love, but when he meets Connor, the handsome new recruit to the Riesgo Fire Service, things start looking up. How can he stop a serial arsonist from destroying everything he holds dear? And as passion threatens to burn out of control between him and Connor, what will happen when Andy learns that the man he loves might not be what he seems?

He’s destined to meet his mate on a killer vacation.

Horror author Mason Wells is having a midlife crisis. He’s burned out as a writer and he keeps falling for guys who are way too young for him. So when his agent, Nora, arranges a birthday getaway for him and a few close friends in the Spanish Sierra Nevada, it’s just the break he needs—until Nora is found drowned in the hotel swimming pool. It seems like someone has a hit list of victims, and Mason’s on it. Can the hotel’s gorgeous owner, Xavi, step in and keep Mason safe?

Lion shifter Xavi Bianco loves the peace and solitude of his boutique hotel in the mountains. It’s a shame the place still holds the memory of his ex, Ramón. When the group of brash Americans arrives for a vacation, he doesn’t expect to find himself falling for one of them. But everything tells him Mason Wells is his destined mate, bizarre as it may be, and when Mason’s friends fall victim to a series of horrific attacks, Xavi knows he must do everything to protect Mason, even if it means risking his own life…