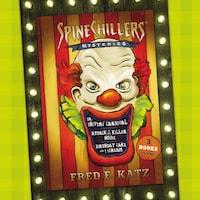 Ready for a good scare?

Kids will enjoy thrills and chills with the children in these stories who have fun as they demonstrate Christian character based on love for God, parents, and one another. Readers share a scare . . . but, of course, ghouls and ghosts are strictly in the imagination.

Dr. Shivers’ Carnival: Kyle Conlon discovers that a bizarre carnival has mysteriously appeared overnight—right next door to his uncle’s house. He and his three friends, Sara, Sammy, and Brent, set out to investigate. The carnival’s owner, Dr. Shivers, invites the four of them to try all the amusements for free—if they’re brave enough.

Attack of the Killer House: Anna and Jonny Greger are looking forward to a quiet day at home. When Jonny’s science project—a robot—attacks Anna, she thinks it’s just Jonny playing a joke. But she knows something is terribly wrong when her hair dryer flies, their video game shoots back at them, and the lawn mower takes off on its own. But a house can’t attack people. Or can it?

Birthday Cake and I Scream: This party’s a Real Scream! It’s MacKenzie’s twelfth birthday. The party is at Creepy the Clown's Pizza Palace. Unlimited play on the video games makes it pretty cool, until Creepy shows up with some games of his own. Soon, all the kids want to win is a chance to get out!