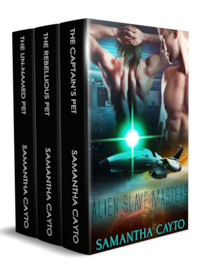 In a not-too-distant future, a lopsided war has led to aliens invading and occupying an Earth settlement. Wid is a young colonist who has been caught harassing the aliens. He and his friends are rounded up and sent to an alien warship patrolling the disputed space. His fate is to serve as a sex slave for the ship’s imposing captain. Wid, at first, fights against his enslavement, but soon learns that not only does he stand no chance against the much larger and stronger captain, he isn’t sure he even wants to.

Like all Travian males, Kell is bound by duty to defend his people. Having risen to the rank of captain, he nevertheless chafes against the boring and endless patrol of the space invaded by the humans. His misses his family and constantly guards against his scheming first officer. He sees his reward of a human sex slave as more of a nuisance. Yet the pretty, fair-haired human’s exotic allure is hard to resist. He finds far more pleasure in the use of his pet than he would like.

Kept naked and leashed, Wid’s days are filled with boredom, while his nights wrapped in Kell’s arms turn from fear into pleasure. Even as the humans plot their escape, Wid and Kell form a bond and their growing affection cannot be ignored. When tensions boil over among the aliens, Wid and his friends may be Kell and his crew’s only chance for survival.

Forced to be the sex slave of an alien warrior, perpetual bad boy, Joel, finds himself tossed into the bed of a space station commander who tests even Joel’s cultivated bravado. While he’d learned to survive an abusive father, the Travian master proves to be a greater challenge. Joel soon finds himself caught between the desperate need to fight his captivity and the unnerving tug of attraction he feels for his new master.

Born to one of the lower castes of his people, Arath has worked his way up to a coveted command. His drive for success has left him isolated from his crew. He has no time or interest in caring for the pesky human pet thrust upon him by his superior. His duty allows him no other choice, so he reluctantly takes what has been given to him. He is surprised by how easily he is seduced by his pet’s allure.

Joel and Arath dance around each other and their growing attraction, until politics intrude and test their tentative feelings. The stakes are suddenly raised, and the choices they make may change the course of history for both of their species.

Stuart McKay, a young man always on the sidelines of life, has been reinvented as Mac, the beloved pet of an alien navigator. At first an unwilling captive, he’s now fallen hopelessly in love with his master. Narith is Mac’s perfect fantasy lover, so much so that Mac does not hesitate to join him on a frightening trip to the Travian home world.

Narith is a brilliant young officer from a lower caste family who has risen quickly up the ranks. He’s also climbed the social ladder by making an advantageous mating. A tragedy has him hurrying home to mend familial fences and fend off the predation of another male. All the while, he tries to tamp down his growing feelings for Mac, yet cannot bear to leave his pet behind.

Mac and Narith’s relationship is tested by family tensions and brought to the breaking point when Narith reluctantly agrees to share Mac with another male. Mac is devastated by Narith’s seemingly cavalier treatment, while Narith is surprised to realize he’s jealous of another male claiming Mac’s body. But more than personal feelings seethe beneath the veneer of domestic harmony and, as trouble bubbles to the surface, the fate of Mac’s and Narith’s very lives is at stake.