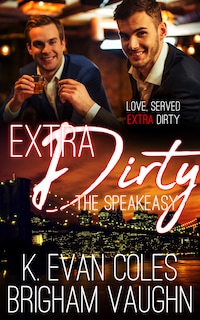 Jesse Murtagh loves his life as a wealthy bisexual businessman dedicated to the pursuit of pleasure. With a circle of friends he trusts implicitly, he enjoys a successful career in his family’s business and as co-owner of Under, an uptown speakeasy, with his friend with benefits, Kyle McKee.

Music teacher and part-time DJ Cameron Lewis lives modestly in a DUMBO loft and isn’t interested in serious relationships. However, he’s always up for some casual fun.

Doing a favor for his friend Carter Hamilton, Jesse meets Cam and is immediately charmed. When Jesse discovers Cam’s other life as a DJ, he is further intrigued. Viewing Cam as a challenge, Jesse pulls out all the stops, but his usual methods to avoid serious relationships fail. Though Cam has no intention of becoming attached, he begins to fall for Jesse, unaware that Jesse’s feelings are changing.

Afraid of heartbreak, Cam pulls away, leaving Jesse bewildered and hurt. They remain friends until a series of misunderstandings widens the rift to breaking point. When Cam steps in to help Jesse through a family crisis, they realize they care for each other more than they’ve been willing to admit. Jesse and Cam don’t want a traditional relationship, but can they build a future that makes them both happy?