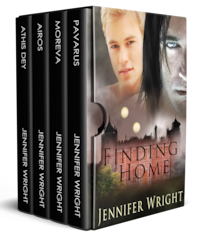 Thrown into another world where dangerous creatures live and rule, will Wesley stay and find love with a vampire, or will the terrors of an unknown realm have him running home?

On a camping trip in Louisiana, Wesley finds himself sucked down a hidden portal and thrown into another realm where he meets Remus, a warrior vampire. With the help of Remus, Wesley embarks on an adventure to find his way home, back to a world not filled with vampires and dragons and magic folk. Along his journey, the handsome vampire finds his way into Wesley's heart. But will his love for Remus help him overcome his fears of the creatures that reign in this world?

Remus has never wanted a man before, but finds himself drawn to Wesley. He's happy with his life as the commander of the vampires, and has no interest in finding a mate. But after Wesley is kidnapped, Remus discovers his feelings for the man are stronger than he thought. Is he strong enough, though, to honour Wesley's wish to return home, and let go of the man he loves?

Keddrick has denied claiming his mate for four years, separating them by worlds just to keep the man he loves safe…from him. Can he resist temptation when his love lands on his doorstep in need of help?

Eli has lusted after Keddrick from the moment the vampire stepped through the portal and into Earth. He had desperately wanted to go with Keddrick when the man returned to Pavarus, but it wasn't allowed—not to mention Eli was under the impression that Keddrick was straight. Four years later his wish has come true, but not in the way he wanted. Barely escaping death by the hands of Wayland, head of the human council on Earth, Eli flees to Pavarus in search of help. The line of events that get him there release a hidden secret deep inside of him he never knew existed, and would soon change his life forever.

Keddrick's restraint towards Eli is being seriously tested, and every day Eli stays with him at the coven, the harder it gets. He wants to keep his distance, but at the same time he wants to do everything he can to please Eli. Yet as time goes on, he feels his resolve slowly crumble, his love for the man too strong to ignore. When Keddrick finds out about Wayland's threat on his and Eli's life, he is determined to stop the madman anyway he can, even if that means going against Eli's pleas for him not to.

Through blood and tears, years of love and moments of betrayal, can these two men find their way through the hardships and into a life of happiness in each other's arms?

Zane has everything in his life under control and in order, but can he keep it that way when a young dragon is thrown into his life?

Zane was meant to be a warrior—end of story. Though he may not have had the most pleasant life living at the coven, he still loved being there. But the steadiness of his world came to a halt all within one day's events. A man he never saw coming has pushed the boundaries of what little normalcy he has, and learning of a secret love is just confusing him even more. Zane has never felt more torn on what he should be feeling…and for whom. Though if he assumed having two men plaguing his every waking thought was hard enough, learning of the danger his mother is in nearly has his head spinning off into another dimension.

The leader of the Dráguns is threatening to take everything away from him, his best friend is slipping further and further away from him, and a little dragon is managing to get under his skin in more ways than one. Sorting out what he has to do, what he wants, and what's right for him will be the biggest challenge he's ever been faced with. Will he follow his heart or will he take the easy path…or is the easy path the right path to begin with?

Is it truly better to have loved and lost than to have never loved at all?

In Larken’s case, he isn’t so sure. He did love someone, then he lost them, and it hurt like hell. Now, Larken has to figure out how he’s going to get over it and find love once more. Then again, does he even want to care for someone so strongly for a second time? He’s had his heart broken once, and he fears it’s too soon to open up to someone else. But how can he really deny the new feelings that are growing inside him?

Khale, on the other hand, has yet to fall in love at all. It’s something he’s wanted his whole life, and now he finds that it may be within his grasp. Khale could love Larken with all his heart—he can see himself with the warrior for the rest of his life. But Khale also yearns for Vardel to finally accept him as his son, and this wanting misguides him, leading him into trouble. Now he needs Larken’s help—he needs the man he’s fallen in love with to save him, but he fears his secrets and possible betrayal will have ruined his chance of ever finding happiness.