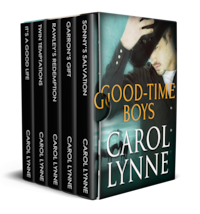 Sonny Good loved his life as an FBI agent, but when his father died and he was needed back home he quit the agency and became a rancher. Now several years later, Summerville, Nebraska is starting to seem a little isolated. An openly gay rancher in the middle of Nebraska just doesn't have many prospective dates.

That is until Garron Greeley moves to town. Garron is the town's newest resident and bad boy bartender with shoulder-length dark brown hair and tribal tattoos. Sonny is struck by lust at first sight. Things between the two of them take off like a rocket until Sonny learns Garron is also the brother of the man who owns the neighbouring ranch. The man Sonny considers his enemy, which leaves Sonny to decide what's more important—the feud with his neighbour or a potentially blazing passion with Garron?

Garron Greeley thought he had it all—a great new job and the man of his dreams to call his own. When his lover Sonny sprang the idea of a commitment ceremony on him, Garron couldn’t have been happier. Except for a few men, the town seemed supportive of their relationship, and many showed up to witness their special day.

The ceremony is everything he hoped for, until an act of bigoted violence shatters Garron's world, leaving his new husband in a pool of blood in the middle of the street. He's left wondering if asking for everything will leave him with nothing.

Working with his new brother-in-law, Garron sets out to prove the identity of the shooter and bring him to justice. Along the way he learns that true love can have many different forms.

After unjustly losing his job, ex-Sheriff Rawley Good turns to the one person he has long denied himself, rancher Jeb Greeley. But Rawley soon learns he can't always be the boss when it comes to love. Relationships aren't like running a town and a man like Jeb is not about to be dominated—even in the name of love.

Though he is no longer the Sheriff of Summerville, Rawley won't back down from his investigation into his brother's shooting. Something's not right. There is a murderer to catch, corruption to fight and his job to get back. More importantly, Rawley isn't about to walk away from the greatest love of his life. Sheriff or not, Jeb Greeley is the man for him…

Now he just needs to convince him of that fact.

For twins Ryker and Ranger Good, life has never been easy. Kicked out of the house when they were barely eighteen, the brothers started a new life together. Now in their thirties they are ready to make a commitment, not only to each other but to the woman they've waited to claim for four years.

Lilly Bevin has been in love with the Good twins for years, only to be treated like a child by them. Now twenty-one, Lilly's ready to spread her wings. Working in the town bar is just one of the ways she's declaring her independence, dating is the other.

When the twins find out the woman they want is dating a smarmy hustler they try to talk some sense into her, only to be told to butt out. Now it's up to them to tame their wildcat and bring her into the fold of their love. A wildcat however, has claws and Lilly isn't shy about using hers to her advantage.

It's a Good Life

Have you ever wondered what life would be like without you?

Although Sonny Good still suffers repercussions from a gunshot wound to his head, he refuses to let them interfere with his life. He does his best to hide what he can from his partner, Garron, in an attempt to gain more independence. When a car accident forces Sonny's newest health concern to the foreground, he begins to slide back into the pit of despair he's worked so hard to crawl out of. What use will he be to his family and friends if he can't lead a normal life?

When a seizure leaves Sonny in need of emergency care, a CT Scan reveals the cause of his continued blackouts. Faced with a risky surgery, Sonny begins to wonder if his loved ones would've been better off if he'd died the day of the shooting.

Faced with the prospect of losing the man he loves, Garron is determined to show Sonny what he has to live for.