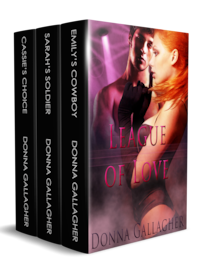 When love is not enough to heal the scars, both physical and mental, of the one you thought you would spend your life with…what else is there?

It's such a cliché—country boy moves to the big city to follow his dreams, leaving his girl and everything he loves behind—but that's exactly what Gareth Andrews has done. Playing rugby league is Gareth's dream, and he's signed with one of the best teams in the competition, the Sydney Jets.

Of course, that has meant a move to the big city and leaving Emily Mackenzie and everything he loves behind. Not that Gareth hasn't begged her to join him in the city—he has, on bended knee—but Emily needs to stay in Gunnedah and help her father on the family farm until her brother's stint in the armed forces is over. But Gareth knows it's more than that. Emily is hiding away, embarrassed by the scars that mar her body in a constant reminder of the bushfire that nearly took her life.

Can love give Emily the courage to face strangers again when her father is badly injured and Gareth shows up at the hospital to support her? Or will she let her fear and shame get the better of her, and break her one true love's heart for a second time?

It's what they have in common that drives a wedge between them—childhoods tormented by loss and heartbreak that have hardened their hearts.

When Sarah, digital and social media coordinator—or ‘digi-chick’, as she’s been called—is asked to babysit the special guest at the Jets Rugby League Club’s annual Anzac Day clash, she’s hesitant. What will the returning war hero, wounded from battle, think when he lays eyes on her dyed, flaming red hair and her face full of metal piercings? More than likely, the rule-following, uniform-wearing conformist will take one look at her and double-time it away from her feral-looking behind.

But the sexual attraction that sizzles between Sarah and Dylan is evident from their first touch, and despite both having built walls around their hearts, as protection from childhood loss and pain, they are keen to take advantage of the sheet-scorching, orgasm-exploding sexual tension that is simmering between them.

Of course, falling in love was never part of the plan.

One night of regret and a simple lack of communication leads to two miserable years apart. What will happen when the two broken-hearted are forced to reunite?

One night has haunted Cassie for over two years. After agreeing to something she didn’t feel sure about, all for the sake of a man—or more correctly, her fear of losing him, she is still consumed with thoughts of her past.

Although a few years  younger than her Riley Walters was all man, in and out of the bedroom. So much so that Cassie believed he would tire of her sexual inexperience quickly. For him she was just a bit of fun—he never said anything to her to make her doubt that assumption. The reason she put herself in such an uncomfortable situation in the first place—to keep him happy. Of course it didn’t help. Riley disappeared from her life and never had anything to do with her again. Now he’s back, part of her social circle, leaving Cassie to find a way to deal with the attraction she still feels for him even after two years of trying to convince herself otherwise.

Riley was horrified at how much rage he felt that night. Memories of a trauma from childhood quickly surfaced—he was terrified that he was becoming a monster, just like the man from his memory. Cassandra Davies filled his mind, his every thought, his obsession. Now he’s been offered a position at the Jets Rugby League Club, an opportunity to work alongside the people he called family, something he’d always dreamed of—but how will he survive being around Cassie if he can’t drag her into his arms, back to his bed and never let her leave?