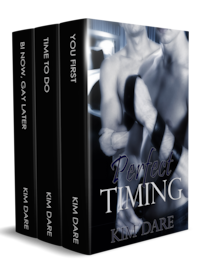 All Luke had to do was come after Justin. How difficult could that possibly be?

Justin was five years younger than Luke and relatively inexperienced. Luke had enjoyed more lovers than he could count or remember - he knew he was good at sex. There was no good reason why Justin should outlast him every time they hooked up.

All Luke had to do was come second, set his mind at ease, and everything would be perfect between them. Hell, if he could do that, he might even consider the serious relationship idea Justin seemed so taken with.

How difficult could that possibly be?

The words 'have sex with a man' can change everything, especially when they're written on a straight man's to do list.

Rigby and Brennan have been best friends forever. Growing up and going away to university didn't alter that. Brennan coming out of the closet to his straight best friend didn't change anything either.

But when Brennan finds an old to do list mixed in with his friend's possessions, and sees 'have sex with a man' written right there at the top, it alters everything. When Brennan realises the man he's in love with isn't as straight as he'd always thought he was, their friendship changes beyond all recognition.

When the friends decide it's time to start ticking off all the items on Rigby's gay to do list, they soon realise nothing will ever be the same - for either of them.

Can a bi submissive really find happiness with a master who doesn't believe bisexuality exists?

Jerry would be Denton's ideal submissive - if only he would just get his last foot out of the closet and admit he's properly gay. Denton loves Jerry, but he knows it's a master's responsibility to make sure his submissive doesn't lie to himself or the rest of the world. He can't let Jerry hide behind the bi-sexual label forever.

Jerry has no doubt that he's one-hundred percent bi-sexual. He's also well aware how much his master hates that fact. Jerry loves his master and he wants to please him, but he can't lie and say he's gay when he knows he's not. Denton would be Jerry's ideal master, if he could just accept the fact he's bi.

Eventually, somebody's going to have to give in and admit he's wrong. The only question is who?